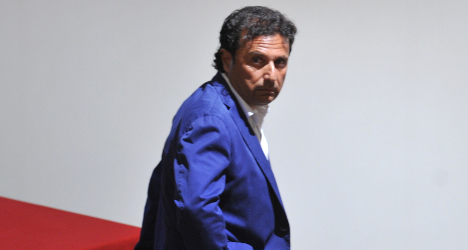 Schettino, who is on trial for manslaughter, arrived on Giglio on Tuesday and was expected to board the stricken ship on Thursday with experts from the court after being granted special dispensation by a judge.

"We are hoping he and his ship will go away soon," said Franco Caverno, 68, a ferry crewman in the island's tiny port, expressing the frustration of many residents more than two years after the January 13th, 2012 tragedy.

A middle-aged woman shopping at a butcher's shop on the picturesque island off the shores of Tuscany, who declined to give her name, said she felt the same.

"Schettino's here, he cried, so what? We're tired of this story! We want him and the boat gone!" she said.

But there was also sympathy for the infamous captain in this seafaring community of just a few hundred souls where some feel he could be a scapegoat for wider blame.

"His was a human mistake," said Giuseppe Modesti, 67, who helps run a restaurant in Giglio's tiny port, where Schettino stopped for a fish dinner on Tuesday.

"There's no real anger here any more. Two years have passed and it's time to make peace with what happened.

"We talked about what happened on the night of the accident. I could tell he was moved by his return to the island," Modesti said. "I was struck by the personal drama of the moment for him," he added.

Giuseppe De Politi, a 70-year-old fisherman, said he felt "neither here nor there" about Schettino's return.

He said locals had "come to terms" with the presence of the 290-metre (951-foot) ship on their coast.

"They've resigned themselves to it after two years, they've become hardened," the fisherman said.

Schettino watched his ship from the deck of the ferry that took him to Giglio from the mainland late on Tuesday in images shown on Rai2 public television in which the much-maligned captain appeared visibly moved.

"I always said I would come personally. I always said I wanted to return dignity to the living, honour the dead and establish the truth for the honour of all Italian captains," Schettino told a Rai2 journalist on the boat.

"I never abandoned the ship!" he insisted, responding to one of the charges in the trial against him which has earned him the tabloid nickname "Captain Coward".

'It makes no sense now'

With 4,229 people from 70 countries on board, the luxury liner crashed into a group of rocks just off Giglio as it was attempting a risky "salute" manoeuvre.

Some victims drowned as they jumped in the sea after the ship keeled over, others perished in flooded lifts.

The ship was righted last year in the biggest salvage operation of a passenger ship ever attempted and is due to be re-floated and towed away in June.

Schettino is on trial on multiple counts of manslaughter, causing a shipwreck, damaging a pristine marine environment and leaving the ship before all the passengers had been evacuated — all of which he denies.

He has accused the ship's Indonesian helmsman, Jacob Rusli Bin, of causing the accident because he misunderstood his steering order and has said he preferred to supervise the evacuation from dry land.

Schettino's lawyer Domenico Pepe was travelling with the captain and the two were believed to be staying in a white house up a cobbled side street near the port, although Schettino was nowhere to be seen on Wednesday.

The lawyer told AFP Schettino's return on board the ship would be "a very strong emotion, especially for him as he was the captain and he tried to do everything humanly possible to save many human lives".

But Michelina Suriano, a lawyer representing seven of the Italian survivors, said Schettino should have got back on board on the night of the disaster — not now.

"It makes no sense now," Suriano, who will also take part in the inspection, said on the ferry to Giglio.

"There were other times when he should have got back on board. People should have been saved, not abandoned."