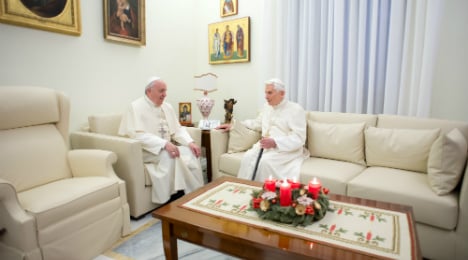 Archbishop Georg Gaenswein was asked whether Benedict's historic resignation in February 2013 was influenced by the moving up of a major Roman Catholic festival to last year because the World Cup was also set to be held in Brazil in 2014.

"Pope Benedict presented his decision to me exactly as you now said it," Gaenswein responded in an interview with the Sueddeutsche Zeitung's weekly magazine.

Now Pope emeritus Benedict wanted his successor to be able to attend the religious World Youth Day gathering in Rio, he added.

"My spontaneous reaction was 'no, Holy Father, you can't!," Gaenswein said, recalling the moment when Benedict confided his decision to him in December 2012.

He added that it had not always been easy to keep the planned resignation secret.

And he recalled the reactions among cardinals when the German pontiff announced his shock resignation in Latin, saying "some faces looked like stone, others disbelieving, perplexed, shocked".

"People looked at each other, asked themselves 'Did I understand that correctly'?"

Gaenswein was asked if preceding pope John-Paul II's suffering had influenced the decision of Benedict, who became the first pope since the Middle Ages to resign when he said he could no longer carry on because of his declining health.

"To carry on in the same manner as the predecessor ended, or even to copy him, he didn't see as his way," the archbishop said.