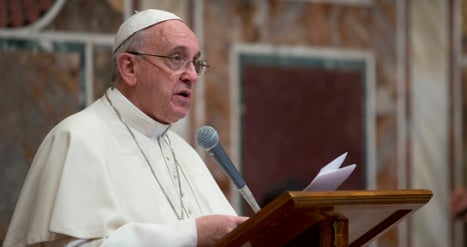 "The Catholic Church is perhaps the only public institution to have acted with transparency and responsibility. No-one else has done more. Yet the Church is the only one to have been attacked," he said in an interview with Il Corriere della Sera daily.

The Pope's comments come weeks after the United Nations told the Vatican that is must remove all child sexual abusers from their posts and turn them over to the police.

In a hard-hitting report, the UN said that the Catholic Church was still failing to do enough to live up to its stated commitment to stamp out child abuse by priests and lay employees, including in schools.

Earlier this week, an Italian priest faced accusations of abusing ten girls, who were parishioners at his church in Agordino, a small town in the northern province of Belluno.

The Argentine pontiff, who will celebrate the one-year anniversary of his election on March 13th, said in the interview that the abuse cases "are terrible because they leave very deep wounds."

"The statistics on the phenomenon of violence against children are shocking, but they also clearly show that the great majority of abuses are carried out in family or neighbourhood environments," he said.

Francis praised his predecessor Benedict XVI – the first pope to apologise to abuse victims – saying he had been "very courageous and opened up a path" to changing the Church's attitude towards predatory priests.

Francis himself has said Catholics should feel "shame" for abuse. In December he created a commission to investigate sex crimes, enforce prevention and care for victims.

Francis himself set up a commission in December to investigate sex crimes, enforce prevention and care for victims.

But the Survivors Network of those Abused by Priests (SNAP) said the pope's comments "reflect an archaic, defensive mindset that will not make kids safer".

"He's done nothing – literally nothing – that protects a single child, exposes a single predator or prevents a single cover up. He can claim his underlings are 'transparent', but history proves otherwise", the US-based victim support and campaign group said in a statement.