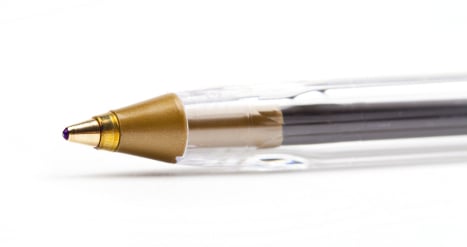 The tactic was so successful that the man, from the Lazio town of Velletri, “cleaned up” the banks within a fortnight, Il Messagero reported.

The story comes less than a week after a woman – described as being in her 70s – robbed a bank in Prato with a toy gun. She is later reported to have said that she needed the money for medicine.

The Rome bank robber, named only by his initials, A.M, reportedly held the pen towards the neck of cashiers, who, believing the weapon was a pen knife, panicked and promptly handed over "wads of cash".

He managed to rob five banks, including branches of Unicredit on Via Nomentana and Viale Regina Margherita, the newspaper said.

The robber was only caught after staff at his next target, an insurance agency, realised he was only wielding a ballpoint pen. After snaring him, staff tried to retaliate, but he managed to escape.

But thanks to their vivid description of his features, he was later traced by police and placed under house arrest.