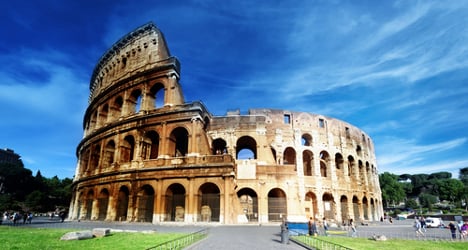 The Colosseum was completed in 80 AD. Colosseum photo: Shutterstock

The 15-year-old reportedly wanted to take a “unique” souvenir home from one of the world’s most famous ancient sites, Italian daily Il Messaggero reported.

During a school trip the girl broke away a brick from the Colosseum, likely placed there when the amphitheatre was built nearly 2,000 years ago, and hid it in her backpack.

She was spotted by another visitor who took a photo and told the site staff, who in turn called the police, according to the newspaper.

The Canadian was stopped by police, who confiscated the ancient artifact, although it is unclear whether the girl was fined.

Rome authorities are no strangers to visitors behaving badly at the capital’s sites. In January Colosseum staff found an Australian man and his son graffiting their names on the ancient monument.

Troublesome tourists have also been wreaking havoc in Florence in recent months, with one American breaking the finger off a 600-year-old Renaissance statue and other visitors defacing the city’s treasured Ponte Vecchio with nail polish.