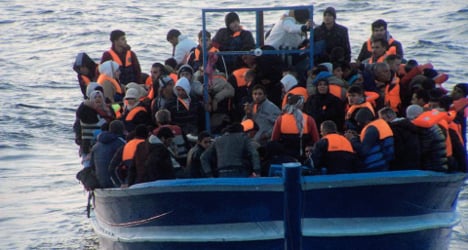 Migrants are rescued off the coast of Italy on March 17th 2014. Photo: AFP Photo/Italian Navy

The group of ten traffickers, aged 23 to 45, were arrested on Tuesday after authorities spent months tracking migrant boats arriving off the east coast of Sicily.

The criminal network is thought to have operated “like a travel agency”, arranging migrants’ travel across the Mediterranean, arrival in Italy and onward journey, La Stampa reported.

Specifically targeting Egyptians and Syrians, they allegedly played a role in trafficking around 1,200 people between last summer and the autumn.

This week’s arrests mark the latest development in an ongoing operation, involving authorities across Italy, in which police have already stopped 47 Egyptians and seized a number of ships.

Human traffickers transfer migrants across the Mediterranean on overcrowded “mother ships”, before forcing them onto smaller and often fragile boats as they approach the Italian coast.

Criminal gangs rely on the Italian coast guard to help their passengers ashore, a tactic which has proved dangerous for the migrants. In October around 400 people died after the rickety boats they were travelling on sunk off the coast of the Italian island of Lampedusa.

Italy is struggling to cope with the number of new arrivals and in November the government appealed to the European Union to help crack down on human traffickers.

Last year 43,000 migrants arrived on Italy’s shores last year, up 325 percent on 2012, many fleeing conflict or instability in countries such as Syria, Eritrea and Egypt.