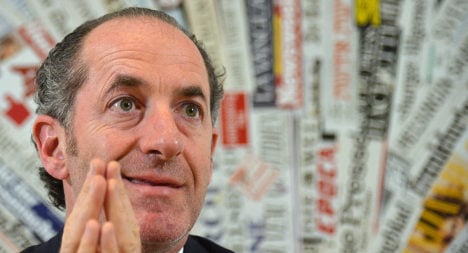 Luca Zaia, the president of the Veneto region, says Rome treats it like "a suburb of the Roman Empire." Photo: Aberto Pizzoli/AFP

"Rome thinks it is still an empire. It goes at its own speed and is slowing the rest of us down," Luca Zaia told foreign journalists in Rome.

Italians in Veneto are taking part in a week-long online poll on whether the region should split off from the rest of the country.

The poll is not legally binding but aims to rouse support for a bill calling for a referendum.

The new Republic of Veneto would be inspired by the ancient Venetian republic – a rich economic, cultural and trading power which existed from the 7th century until its fall to Napoleon Bonaparte in 1797.

"The capital treats Veneto as if it was the suburbs of the Roman Empire, as if the people of Veneto are just taxpayers," he said, adding that the region pays €21 billion more to Rome than it receives in investment and services.

"Over half of Italy is technically bankrupt. Yet there is not a cent of debt in Veneto's balance sheets," Zaia said.

Plans for the referendum have sparked concerns over the possible impact the region's independence would have on Italy's fragile political system.

Secessionist parties have said that should a majority vote in favour in the online poll, they will declare independence and stop paying taxes to Rome.

London-based research consultancy Capital Economics said the poll "highlights several serious problems", including the damaging effects such a loss of revenue could have on Italy's fiscal position.

Rising support for Venetian independence and other anti-establishment parties such as the Five Star Movement (M5S) "demonstrates the corrosive impact of the economic crisis on the country's already fragile political system," it said in a note.

The recession-hit country – labouring under a mountain of public debt – has just begun to see tentative signs of growth, but "high unemployment and the need for tight fiscal policy for years to come will sustain these protest movements, complicating policymaking," it added.

However, Zaia said the bill – which must be approved by the regional council before it goes before parliament – "still has some way to go".

"The government will declare the request for a referendum unconstitutional, the region will appeal and so on," he said.

"How long will it take? We are in Italy," he added in reference to the country's famously slow bureaucracy.