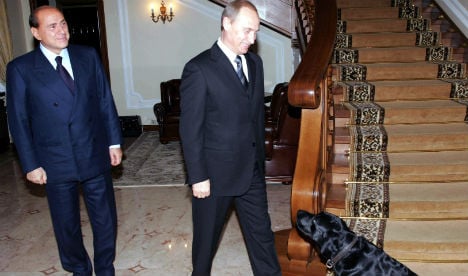 "We need to find a daddy or mummy for thousands of abandoned dogs and cats," the billionaire reportedly said in a telephone call to one of his fan clubs in Rome, as he scrambles to revive support for his centre-right Forza Italia (Go Italy) party, hit hard by his political downfall last year.

An Ixe poll carried out for Rai 3 television on Saturday showed Forza Italia slip into third place behind the centre-left Democratic Party (PD) and the anti-establishment Five Star movement.

Mass adoptions orchestrated by Berlusconi would mean "over 10 million Italians who have a dog or cat will only be able to look on us with fondness, which will help the moderates become a strong political force, a majority," he was quoted as saying on Saturday.

The media magnate — who was ousted from the Senate after a tax fraud conviction and is waiting to learn where he will carry out a sentence of one-year community service — also cited Mother Teresa on animal welfare, saying, "If we love them as we should, we will be very close to God."

The ploy received a tepid response from animal rights groups, with the Italian Association for the Defence of Animals and the Environment (AIDAA) noting that Berlusconi had seriously underestimated the number of strays in Italy, which it put at 750,000.

"We need concrete measures. Berlusconi could come and do some dog-sitting for us," it told the daily La Stampa, renewing an offer to have the 77-year-old serve out his community service with the association.

It is not the first time the former prime minister has resorted to dogs to boost his image. Dudu, a white Maltese terrier brought into his household by his 28-year-old girlfriend Francesca Pascale, has his own Facebook page where he promotes Forza Italia.