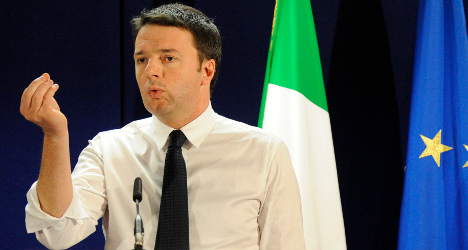 Ahead of a cabinet meeting on Monday, the prime minister said decisive action is needed in order to rid Italy of its burdensome two-chamber system.

“Over the past 20 years Italians have made so many sacrifices, but they have seen the public debt increase because sacrifices have not been made by politicians in Rome,” he was quoted in Il Sole 24 Ore as saying.

“I would like this government to be courageous, and not be scared of taking risks,” Renzi said.

The centre-left leader was responding to criticism on Sunday by Senate President Pietro Grasso, who warned against the prime minister’s plans to overhaul the upper house.

Renzi has proposed creating a Senate composed only of mayors and regional presidents, drastically reducing numbers from the 320 senators currently sitting. Under his proposals senators would receive no additional state salary for the role, would not be able to hold votes of confidence or vote on the country’s budget.

But Grasso accused the prime minister of trying to “cut into the form of the Senate with just a calculator in hand” and said an alternative approach was needed.

“We must speed up the legislative process, without weakening democracy,” he told La Repubblica on Sunday.

“With a first-past-the-post system, with an ample majority prize and only one political chamber, the risk is that they could leap from the constitutional balance and reduce the reach of direct democracy,” Grasso said.

The Senate president said that Italians should be able to vote for senators during local elections, with a quota set for each regional council.

But Renzi hit back, telling Corriere della Sera: "The Senate should not be elected. If the reform doesn't pass, my political career is over."

The prime minister's proposal is one of a number of reforms aimed at reducing the country’s budget deficit and building a more efficient system of governance. With nearly a thousand representatives between the lower and upper houses, Italian politics is one of the most costly systems in Europe.

The two-chamber system has also been blamed for slowing down decision-making, as it grants both the Chamber of Deputies and Senate equal powers.