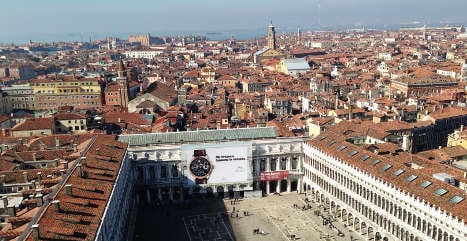 Police said they had arrested activists from a group called "The Alliance" on charges of "terrorism conspiracy and subversion of the democratic order," which is punishable by up to 15 years in prison.

The underground group, made up of radical separatists from the Lombardy, Sardinia and Veneto regions, had been planning to "liberate" the iconic Venetian piazza using weapons from the Albanian mafia and set up a new independent government, police said.

They were planning an attack "by hundreds of people, some of them armed" and "an insurrection from the inhabitants of northern Italy most affected by the economic crisis," law enforcers said in a statement.

"The tank was built to be used for a spectacular action on St Mark's Square," police said.

The plan comes after more than two million residents of Venice and its surrounding region last month voted overwhelmingly in favour of breaking away from the rest of the country and forming their own state.

The online poll, although not legally binding and open to manipulation, showed the strenth of separatist feeling in Italy's northern regions.

Local media named one of the men arrested Wednesday as Franco Rocchetta, a former lawmaker for the Italy's Northern League party who helped organise the referendum in the wake of Crimea's break from Ukraine.

Members of the Northern League, which used to call for full independence for northern Italy and now advocates for broad autonomy, dismissed the investigation as "ridiculous and shameful".

"If the centralist state thinks it can scare or shut up men like Rocchetta, it is making a big mistake," said Antonio Borghezio, a European member of parliament from the Northern League.

Police said members of the group arrested Wednesday were also planning to set up "embassies" in "friendly countries" such as Serbia and Switzerland to obtain international recognition.

The "tank" they were planning to use was in fact a modified Fiat-Allis excavator with tracks had been fitted with "armoured protection, video cameras and a gun turret still to be added".

The police said the suspects had fired blanks from the "tank" to test it in a warehouse in Casale di Scodosia, a small town of around 5,000 inhabitants around 90 kilometres (56 miles) southwest of Venice.

Italian media reported that two of those arrested were part of a group known as "Serenissimi" that occupied the Campanile on St Mark's Square for two days in 1997 in a symbolic protest that inspired the new group.

"The Alliance bases itself on the programme of the Serenissimi but with more aggressive and violent methods," said the investigators, who are led by the prosecutor's office in Brescia in the Lombardy region.