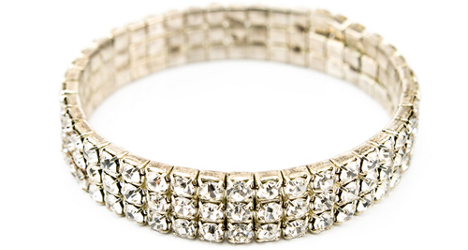 The contents of the woman's bra were valued at €75,000. Photo: Bracelet photo:Shutterstock

The 42-year-old woman, named as Angela B, was stopped by police after they noticed her trying to conceal something in her underwear.

On searching her they discovered a treasure trove of jewels hidden in her bra, along with a Rolex and two other designer watches, Torino Today reported.

The watches and 11 pieces of jewellery, including a bracelet encrusted with 72 diamonds, have a collective value of €75,000.

Such a figure is out of proportion with the declared income of Angela B, a member of the Sinti traveller community, Torino Today said. As a result, police informed the city courthouse of their find and the woman could face criminal charges.

The news comes just two weeks after an Italian man made use of his roomy underwear to try smuggling €40,000 in cash across the Swiss border. His shifty behaviour led customs officials to his packet of banknotes and the man could now be fined half of the total sum.