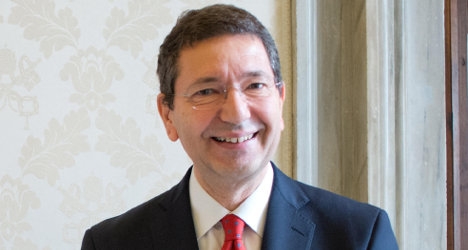 Rome's mayor Ignazio Marino has banned the use of the term 'nomad' in all the city council's communications. Photo: Osservatore Romano/AFP

In a circular to staff that was published in Il Messaggero, the mayor spoke about moving towards policies that promoted “integration”, such as no longer referring to people from the Roma, Sinti and traveller community as “nomads”.

“I think it is one of the key factors in overcoming discrimination,” he said.

“So from now on, when it comes to institutional communication and drafting administrative acts, the correct term to use, instead of ‘nomads’, is ‘Roma, Sinti and Caminanti (travellers)’.

“I hope that, through this simple change in terminology, it reflects that the city council caters to all people living within its territory."

Between 120,000 and 180,000 people make up the Roma, Sinti and traveller communities in Italy, according to figures from a government report in 2011.

Italy has often been in the spotlight for its treatment of the communities.

In October, Rome authorities came under fire from Amnesty International for keeping thousands of Roma people on the margins of society through an “assisted housing” system designed to banish the community in “ghettos” beyond the city’s periphery.

"Roma are an integral part of Italian society,” Amnesty said in a statement.

“Yet, they remain among the most severely affected by gravely inadequate housing conditions and widespread discrimination, in Rome and in many other Italian cities.”

Meanwhile, a bakery sign in Rome banning "gypsies" from entering has sparked outrage in March.