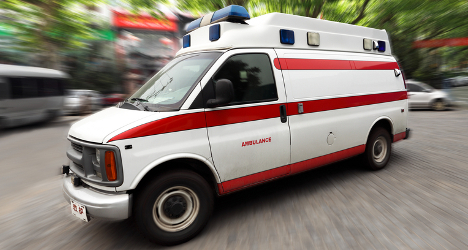 Emergency services were unable to save the boy.Ambulance photo: Shutterstock

The teenager died at a hotel run by nuns where he and fellow pupils had arrived on Monday, Corriere della Sera said.

The schoolboy, from Lausanne in southern Switzerland, was reportedly playing a game with two friends, which involved throwing a knife between them, when he was stabbed on Tuesday night.

Nuns from the Domus Nascimbeni accommodation, close to the Vatican, phoned the emergency services at around 11.00pm but medics were unable to save him.

According to Italian media, police are treating the death as a tragic accident rather than murder.

As Easter and the Vatican’s canonization of two saints approaches, a high number of school groups are flocking to the Vatican and Rome.

The Italian capital also attracts large numbers of foreign university students, a community which has been struck by tragedy in recent months.

In February, a 21-year-old American student was found dead in Rome’s Trastevere neighbourhood, after going missing during a night out with friends. Police are currently investigating the incident.