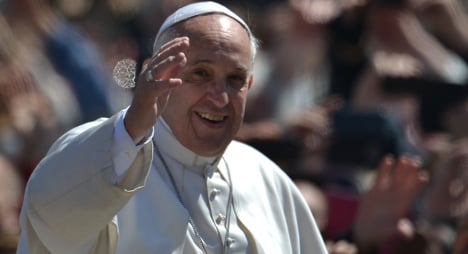 The Vatican has had enough of Pope Francis cold-calling people. Photo: Fillipo Monteforte/AFP

Francis has been dubbed by the Italian press as "the cold-calling Pope" after making numerous calls since becoming pontiff last year. The Pope "even finds time to make calls during Holy Week", TGCom24 reported last week after he called a 102-year-old Italian woman to thank her for a scarf she sent him. "It's beautiful", he reportedly said.

But the spokesman said media reports about the phone calls have been "a source of misunderstanding and confusion".

"Consequences relating to the teaching of the Church are not to be inferred from these occurrences," he said.

The statement follows reports about a phone call that Francis apparently made to a woman in Argentina who had complained her parish priest would not grant her Holy Communion because she had divorced and remarried.

Francis was quoted by the woman's husband as saying that the issue was being "looked at" in the Vatican and that divorcees who take Holy Communion "are doing nothing bad".

Catholic rules currently ban divorcees from taking Holy Communion, the spiritual high point of the mass, although the doctrine is in practice widely flouted by parishes.

The pope has previously been reported making calls from the practical to the intense, including calling his newsagent in Buenos Aires to cancel a subscription and comforting a mother grieving over her murdered daughter.

The Vatican rarely makes official comment on reports of the calls, which often rely solely on the person in question saying that they have been called by the pope.