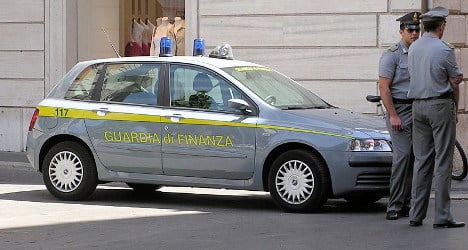 The men allegedly disguised themselves with uniforms from Italy's Financial Guard to rob banks like uniforms pictured. File photo: Wikicommons

Giuseppe Pecchi, 42, Giovanni Liscio, 45, and 57-year-old Roberto Burdieri allegedly used wigs, municipal police uniforms and Financial Guard uniforms to disguise themselves during at least four robberies in the capital over a period of two years.

Armed with guns, the trio allegedly took members of staff and customers hostage for over an hour at a time – giving them just enough time to gain access to the safe, Italian daily Il Messaggero reported on Tuesday.

They would then gag and tie up their hostages before making their escape with the loot.

However, the number of robberies is expected to increase as the investigation continues.

Through the use of wiretapping investigators were able to track down a garage in the southern outskirts of Rome where they found several pistols, a sawed-off shotgun and the police uniforms allegedly used by the men.

This isn’t the first report of unusual bank robberies to hit Italian headlines in recent months.

In March, a man in the Lazio town of Velletri used a Bic biro pen to rob five banks.

The Rome bank robber, named only by his initials, A.M, reportedly held the pen towards the neck of cashiers, who, believing the weapon was a pen knife, panicked and promptly handed over "wads of cash".

He was snared only when savvy staff at his sixth target realized the harmless 'weapon' was not a knife.

Earlier that month a woman, believed to be in her seventies, robbed a bank near Florence with what is understood to have been a toy gun on Monday morning.