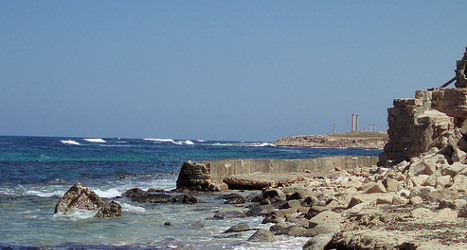 Libya's navy intercepted and rescued 340 illegal migrants off the coast of the western town of Sabratha. Photo: David Holt/Wikipedia

The rescue came on the same day Italy's navy said at least 14 migrants had died when their boat sank between Libya and Italy, the latest in a string of shipwreck tragedies to hit the Mediterranean.

The migrants picked up on Monday were taken to a school near Zawiya, west of Tripoli, before being transferred to detention centres elsewhere in the North African nation, an AFP journalist said.

Among the rescued migrants were 40 women and 13 children, most of whom were Sudanese and Eritreans.

Naval spokesman Colonel Ayub Kassem said their vessel was intercepted by a patrol 16 miles off Sabratha and Zuwara, near the border with Tunisia, at around 6:00 am (0400 GMT).

The boat had started to take on water when the patrol arrived, Kassem said, without elaborating.

The Italian navy had said earlier on Monday that at least 14 people died when a boat packed with migrants went down south of Lampedusa island, Italy's southernmost point.

It said another 200 people had been rescued after the ship sank with a reported 400e on board.

Libya has long been a springboard for Africans seeking a better life in Europe, and the number of illegal departures from its shores is rising.

Hundreds of migrants land in Italy almost every day, most of them asylum-seekers from Eritrea, Somalia and Syria, and many are now picked up by Italian warships.

On Sunday, Tripoli said at least 36 migrants had died and another 42 were missing in yet another shipwreck off the Libyan coast.

The number of attempted illegal crossings from Libya has increased in recent weeks because of good weather conditions and rising lawlessness in the country.