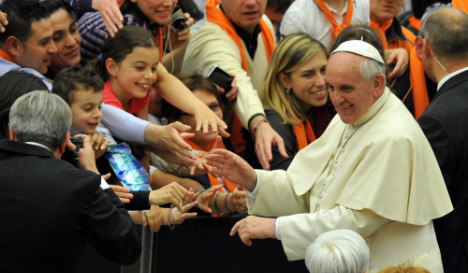 The ceremony in the Church of the Holy Sepulchre — venerated as the place of Jesus's crucifixion and resurrection — is seen by the Vatican as the highpoint of the papal visit to the Middle East.

The trip starting on Saturday is filled with symbolism and efforts to reach out to other denominations and faiths by a pontiff who has made his mark with a more collegiate form of leadership.

The Vatican has billed the visit as a "pilgrimage of prayer" and said the pope will travel in relative simplicity, shunning bulletproof vehicles in favour of open-top cars despite security concerns.

"Francis will reach across boundaries," said David Neuhaus, a Jesuit priest who leads the Hebrew-speaking Catholic community in Israel.

"He will appeal for everyone to open up their imaginations in a region marked by mutual rejections," Neuhaus told AFP.

Father Pascal Gollnisch, director of the Work of the East Christian association, said the pope was making a "political gesture" by travelling as a pilgrim and not as the leader of the world's Catholics.

"All along the way he wants to be received simply, not to be served at table and he wants to avoid any type of worldliness," Gollnisch said.

But there are also pitfalls — as shown by recent protests and anti-Christian vandalism by Jewish religious nationalists over rumours about a deal with the Vatican for the management of holy sites.

The Shiite Hezbollah movement has also complained about a planned trip by Lebanese Maronite Patriarch Beshara Rai to Jerusalem to see the pope since Lebanon and Israel are still officially at war. The trip begins in Jordan where Francis will meet King Abdullah II, celebrate mass in a stadium and meet Syrian refugees — a chance to speak out against the conflict there as well as the forced migration of Christians from the Middle East.

On May 25th, Francis is scheduled to take a helicopter to Bethlehem for another mass and to meet with children from a Palestinian refugee camp, as well as with Palestinian president Mahmud Abbas.

He will then go to Tel Aviv to see President Shimon Peres and travel on to Jerusalem.

In the city, he will meet Patriarch Bartholomew I — a key Orthodox leader who also attended Francis's inauguration last year — and the two will attend the joint prayer with other Christian clergymen.

"There has never been a public ecumenical prayer in a central place for the Christian faith," Vatican spokesman Federico Lombardi said at a briefing.

"It's a historic event."

On May 26th, the pope will visit the Temple Mount and meet the Grand Mufti of Jerusalem Mohammed Hussein.

He will then pray at the Western Wall, visit Israel's national cemetery on Mount Herzl and go on to the Yad Vashem Holocaust memorial.

After that he is set to meet Prime Minister Benjamin Netanyahu and celebrate mass in the Cenacle, the place where Christians believe Jesus held the last supper.

The Cenacle stop has inflamed the ultra-Orthodox and nationalists since Jews revere part of the building as the tomb of King David and it is at the centre of long-running property negotiations, with the Vatican hoping it will be given a right to use the site.

A protest was held there this month and another is planned on Thursday. Israel has said there is "no intention to transfer to Vatican sovereignty or ownership on the Tomb of David or the Cenacle".