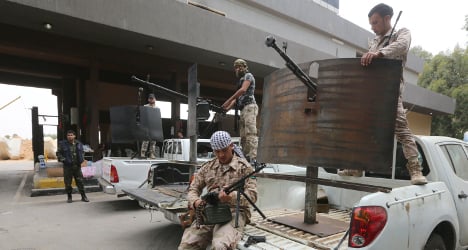 Members of the Libyan army guarding the western gate of Tripoli on Monday. Photo: Mahmud Turkia/AFP

At least two people died and 55 were wounded on Sunday when gunmen stormed buildings of the interim government, demanding its suspension, as part of a loyalty pact with renegade general Khalifa Haftar, who has vowed to drive out Islamic militants from the country.

The assault came just two days after violent clashes broke out between the rival militias in Benghazi, reportedly killed 24 and injuring more than 120.

“The serious events that occurred in Tripoli and Benghazi have led to further instability with repercussions on public safety,” the embassy said.

Last week, the US military moved a team of marines from Spain to southern Italy as a precautionary step in case the US embassy in Libya comes under threat.

The contingent of nearly 200 marines is part of a newly-created "crisis response" force set up in the wake of a deadly attack on a US diplomatic outpost in the Libyan city of Benghazi in 2012.

READ MORE HERE: US troops deploy to Italy due to Libya threat

Libya's central government has struggled to assert its authority over the vast, mostly desert country, which is effectively ruled by a patchwork of local militias and awash with weapons.

In March, the authorities acknowledged for the first time the existence of "terrorist groups" in Libya, particularly in Benghazi and in Derna, an eastern city with a history of Islamist militancy.