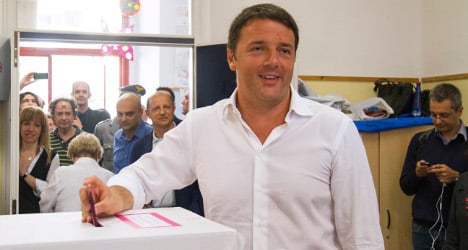 An exit poll conducted by Piepoli Coesis for the ANSA news agency showed the PD scoring between 29.5 and 32.5 percent, compared to firebrand ex-comedian Beppe Grillo's M5S with 25 to 28 percent.

Former prime minister Silvio Berlusconi, who has been booted out of parliament for a tax fraud conviction and was banned from voting or running, got 18 to 20 percent with his Forza Italia party.

The elections were seen as an important electoral test for Renzi's government, which was installed after he ousted his centre-left predecessor Enrico Letta earlier this year without an election.

Grillo's party, which has campaigned against political perks in Italy and garnered a quarter of the vote in last year's elections, will be joining the European Parliament for the first time.

It has called for a referendum on euro membership and for the scrapping of EU debt reduction targets.

The exit polls were released after ballots closed in Italy at 2100 GMT.