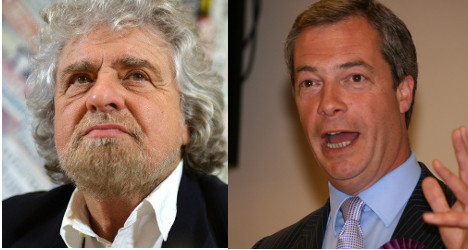 Beppe Grillo said he and Nigel Farage, the leader of UKip, are "rebels without a cause". Photos: AFP (L) and Wikipedia (R).

According to a statement on UKip’s website, Grillo told Farage: “We’re rebels with a cause, and we shall whistle as we march.”

Both parties performed well in the European Elections, with UKip, which persistently tries to deflect racism claims, winning the majority of the votes in Britain, and M5S coming second in Italy.

Grillo reportedly said “we fight with a smile” as the leaders came together to discuss the possibility of anti-EU parties coming together during what was described in the Italian media as a “fun and animated” dinner.

They agreed to meet again in the coming weeks.

Farage said in the statement: “If this works out it would be magnificent to see a swelling in the ranks of the Peoples’ Army. If we can come to an agreement, we could have fun causing a lot of trouble for Brussels.”

The leaders have in recent months "publicly voiced mutual fascination and admiration for each other’s work and campaigning style," the statement added.

But Grillo's campaigning style was called into question earlier this week when his spin doctor Gianroberto Casaleggio told him to “tone down” his aggression and "smile more".