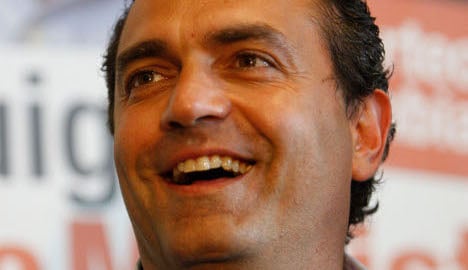 Naples Mayor Luigi De Magistris said the city council "has a duty to work for all its citizens, without discrimination". Photo: Carlo Hermann/AFP

Mayor Luigi De Magistris said his administration will begin to include the weddings of gay couples, specifically citizens of Naples who married abroad, in the civil register.

But the move has been met with opposition by Crescenzio Sepe, a Catholic cardinal and archbishop of Naples.

“I have nothing against gay people…but I think that in Naples there are more urgent measures to implement,” he was quoted in Corriere del Mezzogiorno as saying, referring to the pot holes that need fixing in the city's roads.

De Magistris, however, rejected the claim that he was being sidetracked from more important issues, saying his administration “has a duty to work for all its citizens, without discrimination”.

“The subject of foreign marriages between people of the same sex, which we want to include in the civil register, isn’t secondary, because it concerns the lives of a lot of citizens,” he was quoted in Corriere as saying.

The decision by the mayor comes weeks after an Italian court for the first time recognized gay marriage, despite same-sex civil unions not yet being allowed in the country. The court ordered the city council of Grosseto, in Tuscany, to register the marriage of a gay couple who wed in New York in 2012.

The ruling was described as “a revolutionary event” by Fabrizio Marrazzo, a spokesman for Gay Center, who called for a “positive political response” from Prime Minister Matteo Renzi.