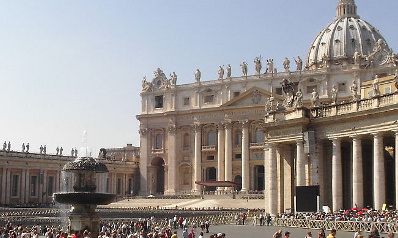 The coach driver exposed himself shortly after the papal audience at St Peter's Square in the Vatican: Photo: Flickr

The 56-year-old, from Camerino, a town in the Marche region, “dropped his trousers and rubbed himself up” against the 19-year-old girl, Gazzettino reported.

The foreign visitor reportedly started screaming, catching the attention of passersby, who alerted Vatican police. The officers were at the scene within minutes, the newspaper said, adding: "Upset, the girl told them everything and immediately recognized the assailant."

The incident happened shortly after the papal audience, which attracts thousands of pilgrims to the Vatican each Wednesday at 10.30am.

The man, who reportedly confessed to the act, had driven pilgrims from Marche to Rome that morning.

Earlier this year, a priest from in the northern Italian city of Savona was fined after exposing himself on a street to two young girls, while drunk.