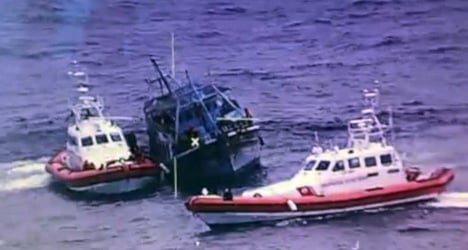 The Italian authorities intercept a migrant boat in 2013. More than 50,000 migrants have landed in Italy by sea so far this year. Photo: HO/Italian Coast Guard/AFP

Three people perished and two more were washed away when their inflatable dinghy approached a Maltese oil tanker coming to their aid, the emergency services said.

In a separate incident, four migrants from the Central African Republic fell from a rope ladder connecting a merchant ship with their stricken vessel and were swept away, according to the ship's captain.

The incidents follow the arrival of 2,000 migrants in Italy on Monday after an international operation to rescue refugees packed into 25 boats travelling from Libya.

Rome says more than 50,000 migrants have landed in Italy by sea so far this year, a similar number to those who arrived in all of 2013.