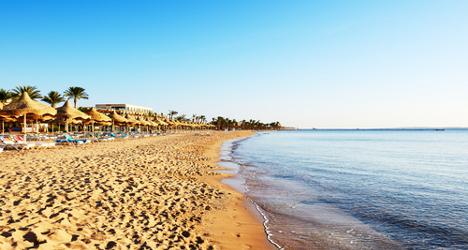 The Italian foreign ministry warns against travel to many tourist hotspots in Egypt. Egypt photo: Shutterstock

Around 700 tour operators gathered this week at the ‘United for Egypt’ conference held at the Port Ghalib resort, La Stampa reported.

Organizers from both countries hoped the meeting would give a much-needed boost to tourism to Egypt, which has seen a dramatic fall-off in recent years.

“In 2008 in Egypt there were 1,073,159 Italian travellers. That number literally collapsed and in 2013 local tourists to the coast numbered just 504,110,” Hisham Zaazou, Egypt’s tourism minister, was quoted in La Stampa as saying.

The Egyptian tourism industry has been in difficulty since Mubarak was driven out of power in February 2011, after a 30-year rule, prompting fears among travellers of instability in the country.

Muslim Brotherhood leader Mohamed Morsi was elected president the following year, only to be ousted in a military coup in July 2013. Last month Abdul Fattah al-Sisi, a former army general, won fresh presidential elections with a reported 96.9 percent of the vote.

While some tourists have returned to Egypt, Ahmed Abdallah, governor of the Red Sea Governorate, said that Italians were more cautious than other nationalities.

“The influx of Italians is the only one that immediately saw a collapse of dramatic proportions,” he was quoted as saying. “The Russians continued to come, they make up 55 percent of the visitors, and nor have the Germans abandoned [Egypt].”

Paolo Mieli, president of publisher RCS, urged fellow Italians to return to Egypt. “For us Italians this country has for so long signified mystery and fascination…we must return, because this is a bit like our home.”

But the Italian foreign ministry remains wary. “Considering the progressively deteriorating security situation we advise against travel in the entire Sinai peninsula,” the ministry said in its latest travel advisory.

“We advise against all but essential travel in Egypt to a number of places and tourist areas in northern Egypt, the continental coast of the Red Sea and the Mediterranean Sea,” the Italian foreign ministry said.