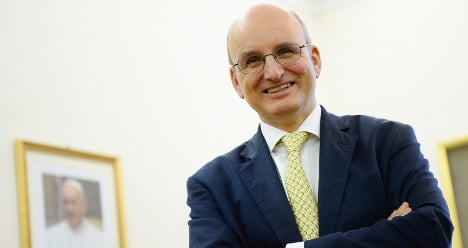 Ernst von Freyberg, who was appointed chairman in February last year, is expected to resign as early as next week, according to a report on Reuters.

The bank, formally known as the Institute for Works of Religion (IOR), has long been dogged by scandals and two former directors are facing money-laundering trials.

The appointment of Von Freyberg, a German lawyer and financier, was approved by Pope Benedict XVI two weeks before he resigned.

At the time, the Vatican said that Freyberg’s appointment came after a “painstaking and detailed selection process”, which for the first time involved an international head-hunter.

His exit is expected to be announced alongside the publication of the bank’s annual report, likely to be next week, sources told Reuters.

The departure comes despite Freyberg being praised for his work at the bank, which has involved the closure of hundreds of accounts as well as the introduction of tighter money-laundering regulations, greater transparency and a number of probes into suspect financial dealings.

A spokesman for the Vatican bank declined to comment on the report when contacted by The Local.

Juan Zarate from the Centre for Strategic and International Studies, who was Bush's deputy national security adviser for counter-terrorism, now has to enforce transparency rules.

The three others chosen were Italian manager Maria Farina, Swiss financial consultant Marc Odendall and Joseph Pillay, who helped build up Singapore's economy as a top civil servant and businessman, the Vatican said in a statement.

Meanwhile, five Italian members of the body who were also appointed by the pope's predecessor, Benedict XVI, were dismissed.