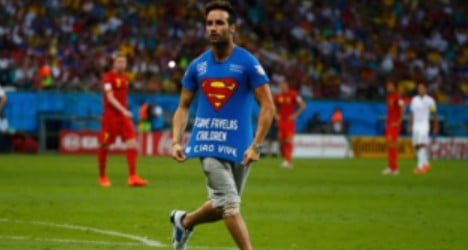 Marco Ferri ran onto the pitch during the Belgium-USA game. Screengrab: YouTube

Marco Ferri, otherwise known as The Falcon and well-known in the football world for his stunts, reportedly leapt from a wheelchair after managing to obtain a ticket as a disabled person.

He then slipped through the barrier and ran onto the pitch, stopping the game at the 16th minute.

Ferri was wearing a blue Superman T-shirt saying Save Favelas Children and Ciro Lives, in honour of Ciro Esposito, a Napoli supporter who died this month after being shot ahead of a football game in Rome in early May, Il Centro Pescara reported.

Ferri, who also invaded the pitch during the World Cup 2010 semi-final between Germany and Spain, told the Italian news agency ANSA that police detained him for five hours and banned him from attending future games.

Fifa secretary Jerome Valcke was quoted by ANSA as saying: "This person is a terrible example and must be punished."

Ferri has been charged with invading a playing field and assuming a false identity.