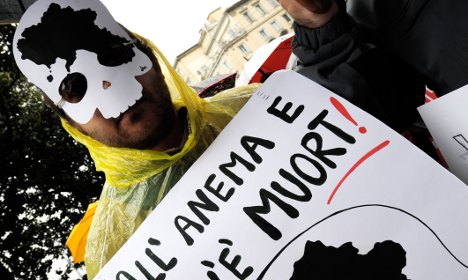 A protester joins a March in Naples in November 2013, against illegal waste dumping. Photo: Mario Laporta/AFP

In the 23 provinces in Caserta, there was an “excess of hospitalization for leukemia” among children under the age of 14. In Naples’ 32 provinces the same age group suffered an alarming rate of tumours in the central nervous system, particularly among babies, ISS said.

Overall, the study found a higher than average death rate and “hospitalization for diverse illnesses and multiple causes”.

The poor state of health among the population – living in an area where the mafia has for years illegally dumped waste – was not restricted to children.

ISS found a higher number of cancers across all ages, including malignant breast, stomach and throat tumours.

The findings confirm previous studies into the impact waste dumping has had on the community in Italy’s Campania region. According to one study by the Pascale National Tumour Institute, cancerous tumours have risen by 47 percent in men and 40 percent in women.

Since the 1990s, ten million tonnes of waste have been illegally dumped in the area around Caserta and Naples, environmental organization Legambiente has said.