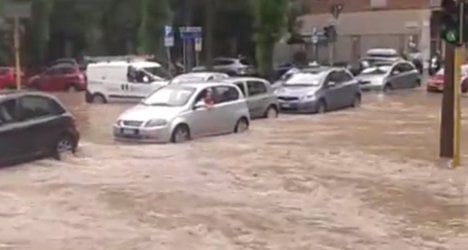 Mayor Giuliano Pisapia called a meeting with a crisis unit to respond to the floods. Screenshot: juliocesar/YouReporter.it

Milan woke up to stream-like streets after the river flooded overnight, with local authorities spending the morning pumping water out of the city, Ansa reported.

Istria metro stop was reopened at lunchtime, ATM transport authority said, hours after any hope of a commute to work had been washed away. Trams were diverted and at least 28 bus lines were subject to delays.

Mayor Giuliano Pisapia called a meeting with a crisis unit to respond to the floods, city hall said.

Residents waking up to the floods took to social media to post photographs of “summer” in Milan.

A video posted on YouReporter.it shows a line of cars at a standstill as water flows beneath them, while baffled locals gather on a wall to observe their new waterway.

As northern Italians contend with flooding in Milan, those in the south are recovering from a weekend of high temperatures. Sardinia had been forecast to be the hottest place in the country, with temperatures on the island reaching 40C.