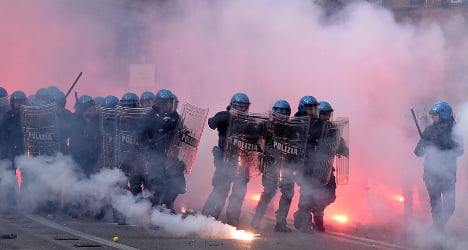 Riot police in Rome clash with protesters during the march on April 12th. Photo: Filippo Monteforte/AFP

Three of the men have been put under house arrest, two from Rome and one living in Marghera, north-east Italy, while another is currently in a district prison in Ferrara.

One of the protesters, named only by the initials MC, 22, is believed to have used a slingshot to hurl objects at riot police during the April 12th protest. He was wearing ski goggles and a gas mask at the time, La Repubblica reported.

The anti-government march descended into chaos outside the Ministry for Industry, on Rome’s Via Veneto, with protesters clashing with riot police.

The standoff outside Industry Ministry before police baton-charged; protesters throwing vegetables, bits of road #12A pic.twitter.com/SzLcunQhKK

Twenty police officers were reported injured at the time, while Italian media this week said 60 were seen by medics. One protester was seriously injured when a firecracker reportedly went off in his hand.

Organizers said 15,000 people took part in the initially peaceful protest, calling on the government to take action on a number of issues including housing and job creation.