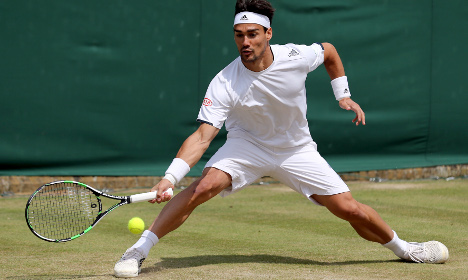 Fabio Fognini said on Twitter that he did not want to offend anyone. Photo: Andrew Cowie/AFP

The Italian was heard to call Serbian qualifier Filip Krajinovic a "sh***y gypsy" during his straight sets defeat in the second round of the Hamburg Open on Wednesday.

A video of Fognini showed him muttering the Italian word "zingaro", meaning gypsy, while he had his back to Krajinovic during the match.

After it was picked up on social media, Fognini tweeted in Italian: "I made a mistake. I didn't want to offend anyone…I know Filip very well and anyone who plays sports knows that at times you get carried away saying things that make no sense."

Krajinovic, ranked 152th, won 6-4, 6-0 against the defending champion and second seed. The volatile Italian also broke his racket in half by stepping on it midway through the second set.

The latest incident follows Fognini's record €20,300 fine at Wimbledon for telling tournament official Wayne McEwen that he would "smash my racquet in your head" during his heated five-set win against American Alex Kuznetsov.

He was docked $20,000 for the offence of damaging the grass court with his racquet and fined an added $7,500 for abusing McEwen and making an obscene gesture at Kuznetsov.

The Wimbledon fine took his career fine total to a reported $54,100 at Grand Slams.