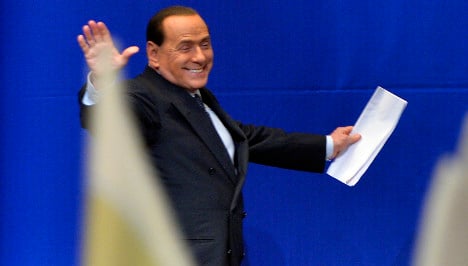 Silvio Berlusconi's acquittal in a high-profile sex-for-hire has made him more determined to revive his political career. Photo: Andreas Solaro/AFP

The 77-year-old's conviction to seven years in jail for paying for sex with an underage prostitute, known as "Ruby the Heart Stealer", was overturned by an appeals court on Friday.

The media magnate is now rumoured to be attempting to rekindle relations with his former right-hand man and prodigy, Interior Minister Angelino Alfano, who broke ties in November to set up his own party, the "New Centre Right" (NCD).

"In a certain sense Berlusconi has never been out of the game. He's always been an important player able to pull in millions of votes," political scientist Roberto D'Alimonte said.

A friendship deal would boost the right wing – which fared badly in the European elections – and possibly help put Berlusconi back on the political map after a series of legal scandals which saw him ousted from parliament last year.

The two men, who have not been on speaking terms for months, were reported by Italian media on Monday to have had a lengthy conversion about healing the rifts between the NCD and Berlusconi's Forza Italia ("Go Italy") party.

"Let's end the fighting, the Italians are tired. Let's work to bring the moderates together," the billionaire is reported to have said to Alfano, who is considered a traitor by many of Berlusconi's fiercest supporters.

The 43-year-old is said to have assured his undivided loyalty in return.

The small NDC is a key ally in Prime Minister Matteo Renzi's coalition government and holds three important ministries – interior, transport and
health – but only managed to win just under 4.0 percent at the EU elections.

The centre-right in general suffered, with a beleaguered Forza Italia pocketing just 16.8 percent of the vote, while Renzi's centre-left Democratic Party (PD) scored a stunning win over the Eurosceptic right with 40.8 percent.

'A declaration of intent'

Though Berlusconi has kept a low public profile while carrying out community service for tax fraud, he has been deliberating creating a new "federation of parties" on the right, built around Forza Italia and NCD.

"With the acquittal in the Ruby case, we've now moved from the theoretical to the practical," Italy's best-selling Corriere della Sera daily said.

All right-wing parties – including the anti-immigration Northern League and Fratelli d'Italia ("Brothers of Italy") – will be consulted on the federation, a "declaration of intent" will be signed and a programme established, it said.

The aim is to hold primaries in time for regional elections later in the year and pick a candidate to become leader of the opposition and eventually
run against the young and charismatic Renzi at the next general elections in 2018.

Berlusconi and Alfano are expected to hold a working lunch on the subject this week – though the latter is determined not to relinquish the NDC's goals.

"Either Forza Italia wants to join us in creating a large, popular and European alliance, or it wants to play footsie with the racist and
anti-European extreme right," he told the Messaggero daily in an interview on Sunday.

"We are not asking for an act of generosity. We are asking for a clear political line which is compatible with ours," he said.

'No chance' for Berlusconi

Political expert Gianfranco Pasquino at Johns Hopkins School in Bologna said he doubted Berlusconi would be able to revive his career with a
last-ditch attempt to unite the right and bring Alfano back into his inner circle.

"The split with Berlusconi is too serious. If Alfano wanted to come back to Forza Italia he would have to have to fight those who don't want him. The right is seriously fragmented," he said.

"Renzi is enjoying an extraordinary moment and there's nothing Berlusconi can do about it," the professor said, adding that the centre-left "looks like it will be in power for a long time."

And D'Alimonte agrees: "The Berlusconi period is coming to an end. We're at the end of the day – it's a drawn-out end, but it's an end nonetheless."

The centre-right would be best advised to pick a fresh-faced leader with no connections to the ageing magnate, who still has several legal issues pending – including a trial for bribing a senator – and may yet see the sex-case return to haunt him in Italy's highest court, he added.