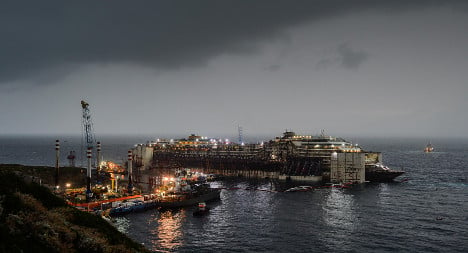 The ship, which capsized two and a half years ago off the Tuscan island of Giglio, is progressing at close to two knots (3.7 kilometres per hour), engineer Sergio Girotto, one of the heads of the operation, told Italian television.

The rusting liner, which was floated from its watery grave in the biggest salvage operation of a passenger ship ever performed, is being be towed away to the port of Genoa in northwest Italy to be dismantled and scrapped.

Cigars and champagne for jubilant #CostaConcordia divers on #Giglio. pic.twitter.com/HBiF4Yuvu0

Surviving passengers who have returned to Tuscany's Giglio island gathered with locals and holidaymakers to bid a final farewell to the once-magnificent cruise ship.

The ship – roughly twice the size of the Titanic – will be dragged up the Corsica channel by two tug boats and is expected to reach Genoa in four days, weather permitting.

The length of three football fields, the crippled vessel was first manoeuvred into position by British and Spanish tug boats in a complex operation which began at 8.30 CET.

A Dutch tug boat and a Vanuatu-flagged one then began to tow the 290-metre (951-foot) vessel away, while 12 other boats sailed in a convoy alongside, carrying divers, engineers, a medical team and environmental experts.

An image of the convoy escorting #Concordia towards its final destination: Genova pic.twitter.com/cFINuf3BKp

South African salvage master Nick Sloane – who has described removing the ship as the "biggest challenge" of a career that has taken him to six continents and two warzones – said before the operation got underway that he was ready to "wave goodbye to Giglio".

A 17-person team of salvage workers will be on the Concordia itself during the journey.

Precision sensors attached to the sides of the ship will monitor for possible cracks in the crippled hull, while underwater cameras will watch for debris washing out of the vessel amid fears toxic waste could spill into the sea.

Objects floating free such as suitcases, clothes and furniture will be caught in a huge net while infrared sensors will be used to detect possible oil leaks at night.

Engineers last week used vast air tanks attached to the ship's sides to float the liner, which rose above the waves deck by deck to reveal gaping windows, a rust-tainted bow and the faded Costa Concordia emblem on its flanks.

The doomed ship struck rocks just off the Mediterranean island on the night of January 13th with 4,229 people from 70 countries on board, just as many passengers were sitting down for supper on the first night of their cruise.

The crash tore a massive gash in its hull and the ship veered sharply as the water poured in, eventually keeling over and sparking a panicky evacuation.

The #costaconcordia and its escort flotilla are turning north, soon just a speck on the Giglio horizon. pic.twitter.com/mnLlcn8FmD

Pablo Lazaro, a 66-year-old Spanish survivor who had been on the cruise with his wife and stepson, said the terror of that night – with people throwing themselves into the icy sea in a bid to survive – would never leave him.

"When I was getting into the lifeboat amid all the chaos I thought this might be my last day alive," he said as he gazed out at the wreck from the port.

Lazaro joined fellow survivors in throwing flowers into the sea at the shipwreck site in a solemn ceremony on Tuesday.

The body of Indian waiter Russel Rebello is still missing and there will be a search for his remains when the ship is dismantled.

The ship's captain Francesco Schettino is on trial for manslaughter, causing a shipwreck and abandoning the ship before all the passengers had been evacuated – even though he has claimed that he fell into a lifeboat.

Dubbed Italy's "most hated man" by the Italian media after the disaster, he found himself in hot water again on Tuesday after photographs emerged of him partying on the island of Ischia while the final preparations were being made to tow away the wreck.

Four other crew members and an executive from the ship's owner Costa Crociere, the biggest cruise operator in Europe and part of the US giant Carnival, have already plea-bargained and been convicted on lesser charges.