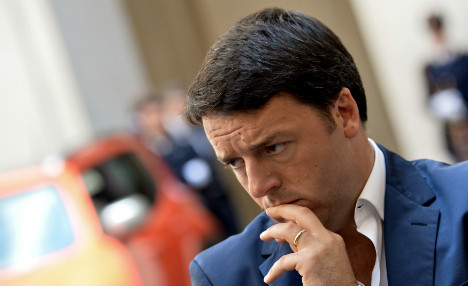 Italy's Prime Minister Matteo Renzi looks on during the presentation of a new car model by Italian automaker Fiat, on July 25, 2014 at the Palazzo Chigi in Rome. AFP Photo/Tiziana Fabi

The 39-year-old prime minister came to power in February with promises to boost growth in the debt-laden country and streamline Italy's notoriously bloated institutions. Since then he has run into trouble with a key bid to streamline the Senate.

"We are going ahead with the reforms whether they like it or not," Renzi said this week after nearly 8,000 amendments were submitted to delay plans to strip the upper house of parliament of much of its power.

Italy's financial Il Sole 24 Ore daily wrote Friday of "concerns that… the stall on institutional reforms could put the whole government reform programme at risk" and weaken Renzi's hand as he tries to negotiate greater flexibility from Brussels over the country's debt levels.

"A loss of credibility on the reform front would not be a good calling card for Italy's presidency of the European Union, which has just begun," it said.

Senators are fighting to obstruct the bill to transform the body into a small chamber of regional lawmakers with sharply reduced legal powers, a move which would stop bills getting bogged down in a back-and-forth between the lower and upper chambers.

It would also help prevent a repeat of the political deadlock which followed last year's election, by throwing out rules that make it difficult for any one party to secure an overall majority in both houses.

But while the prime minister has nominally secured the support of former premier Silvio Berlusconi, other rivals on the right worry the Senate bill would prove "too big a success" for Renzi, propelling him towards victory at the next general election, La Stampa daily said Friday.

"Matteo Renzi is the big target, a meddler, stirring things up…determined to call into question privileges which are no longer defendable," editorialist Federico Geremicca wrote.

Senate head Pietro Grasso's decision to cut short the debates to permit a first reading of the bill by August 8 sparked fury from the anti-establishment Five Star Movement in particular, which accused Renzi of "killing democracy" with plans which smacked of authoritarianism.

The former mayor of Florence has announced the government will hold a referendum on the bill — but only after it has been before the lower and upper houses of parliament twice, a process experts say could take months and risks derailing the reform agenda.

Despite the nickname "ll Rottamatore" ("The Scrapper") for his promises to scrap the political status quo, Renzi has fallen behind on his vows to impose tax reform, fight corruption and bring down the country's high unemployment rate, which edged up in May to 12.6 percent.

Critics on the left have accused him of using the Senate bill to hide his failures to tackle poor growth in the eurozone's third largest economy, which is struggling to emerge from its deepest recession in the post-war period.

"What are you going to give Italians to eat? The Senate reform?" said Loredana De Petris, senator for the Left Ecology Freedom party, pointing to the IMF's decision Thursday to slash its 2014 growth forecast by half to just 0.3 percent.

Renzi, who has promised to quit his post if the reform is blocked, for now has sworn "to go onwards and not give up".