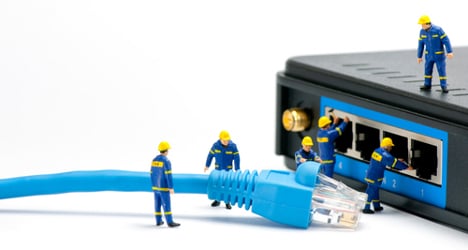 More than a third of Italians have never used the internet. Broadband image: Shutterstock

Despite “slight improvements” being made in broadband access, Italy still falls behind other EU countries and is progressing more slowly than elsewhere in Europe.

Broadband speeds above 10 Mbps are made available by just 18.4 percent of providers in Italy, compared to the EU average of 66 percent, the European Commission report said.

Slow internet connections may well put Italians off getting online, as the EU reported that 34 percent have never used the internet. This is the fourth-highest figure in the EU and far greater than the European average of 20 percent.

READ MORE: A third of Italians totally shun the internet

Italy is of such concern that the Council of the EU last year told Italy to upgrade its infrastructure for high-speed broadband. The EU said that the problem was particularly bad in the south, exacerbating economic problems in that part of the country.

But Fabio Pompei, a Rome councillor who presides over the city’s technological innovation commission, says that users may also be partly to blame for Italy’s poor figures.

“Italy has high potential for the internet, the coverage of the 20 Mbps has reached 60 percent of the population but the subscribers that have requested to use it is less than ten percent,” he told The Local.

Instead of the government focusing on technological infrastructure, Pompei said that lawmakers should instead focus on encouraging citizens to get online.

“Politicians must commit themselves to rolling out strategies that favour internet useage with simplified access to services for the population, above all for the over-60s,” he said.

At present Italians stick with their slow internet connections, rather than upgrading to high-speed broadband, “to reduce the expense and because they don’t see the ‘value’ in using a quicker connection.”

The government’s strategy has so far involved investing €1.1 billion to get basic broadband to the rural and isolated areas.

Using government and EU funds, almost half of the planned projects had been finished by January 2013. As a result access to the internet has improved for 3.4 million people, with plans to reach another 2.6 million over the next 18 months.

The main target of funding has been Italy’s poorer southern regions, which have proved slower than the central and northern regions to get online.

In 2013 €181 million was earmarked to improve internet connectivity Italy’s southern Campania region, with €5 million put aside for Molise. This year a €127.6 million investment was announced for Calabria and Puglia in the south, in addition to cities in northern Lombardy.