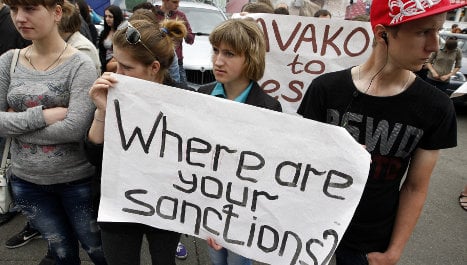 Young people during a protest rally in front of a European Union delegation in Kiev on May 30th. Photo: Yuriy Kirnichny/AFP

Late Monday, the leaders of the United States, Italy, Germany, France and Britain put aside their differences and agreed for the international community to "impose further costs" on Russia.

Ambassadors from the EU's 28 member states are holding final talks aimed at drawing up "a strong package of sectoral sanctions as swiftly as possible."

They intend to limit Russian access to European financial markets, restrict sales of arms and dual-use goods, and prevent the export of sensitive technology, especially in the energy sector.

The alleged shooting down of Malaysia Airlines flight MH17 by pro-Moscow rebels with a Russian-made missile has seen EU holdouts against broader sanctions such as Italy and Germany change tack, agreeing to accept real pain in order to change the mind of President Vladimir Putin.

Germany alone accounted for nearly €90 billion of the total and it has huge investments in Russia, closely followed by Italy.

The EU as a whole relies on Russia for a third of its gas supplies, while some member states are totally dependent, a fact of life which has complicated the bloc's response to the crisis.

The International Monetary Fund warned last week that those economies with "very active and direct trade links with Russia, particularly in eastern and central Europe and central Asia," would be worst affected by the new measures.

Estimates say the planned sanctions could shave the bloc's annual output by around 0.3 percent and 0.4 percent in 2015, enough to put its still struggling economy in serious trouble.

For a Russia teetering on the brink of recession, however, the pain could be even greater with losses of 1.5 percent and 4.8 percent of gross domestic product (GDP), according to the EU Observer website.

Moscow has dismissed the asset freezes and travel bans imposed by the EU so far on some 100 individuals and entities as ineffective and counterproductive. Its tone was unchanged faced with a painful new raft of sanctions.

"I can assure you that we will overcome any difficulties that develop in various sectors of the economy, and maybe we will become more independent and confident in our own strength," Russian Foreign Minister Sergei Lavrov said.

But the prospect of tougher steps has sparked concern outside Russia.

"Any future erosion of our relationship with Rosneft, or the impact of further economic sanctions, could adversely impact our business and strategic objectives in Russia, the level of our income, production and reserves, our investment in Rosneft and our reputation," BP said.

Western sanctions in the past have proved controversial, failing to deliver results as quickly as hoped in such cases as Cuba, Zimbabwe and Iran, countries which suffered badly but also learned how to get around many of the restrictions.

There is also uncertainty concerning the Russian response, be it in kind or in the shape of increased support for the rebels in eastern Ukraine or action in any of the many crises unfolding in the Middle East or North Africa which could harm Western interests.

"It is clear that there is a risk of Russian reprisals," one EU diplomat said, noting that Moscow has repeatedly used trade embargoes to put pressure on former communist states such as Moldova or Georgia seeking closer ties with the European Union.

Another EU diplomat downplayed this possibility, saying the bloc's leaders will have taken it into account when they agreed to up the ante with Putin.

"Putin is going to try and divide the Europeans and his response will be a test of the EU's unity," the diplomat said.