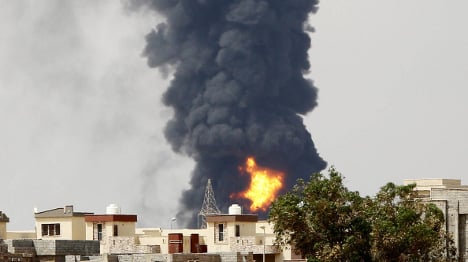 The fire has raged at at an oil depot in the outskirts of Tripoli since Sunday. Photo: Mahmud Turkia/AFP

"Italy continues to evaluate all options for helping Libya, bearing in mind the enormous technical difficulties and the fact that the area in question has been an arena for clashes between militias since July 13th," Italy's foreign ministry said.

The huge blaze raged for a third day at a fuel depot near Tripoli's airport on Tuesday, while a paramilitary warplane crashed in Libya's second city Benghazi during fighting with Islamists.

Amid increasing lawlessness and uncertainty, France, Portugal, the Netherlands, Canada and Bulgaria became the latest nations to ship out their citizens or close their embassies in Tripoli.

Two weeks of fighting around Tripoli airport and between Islamists and a former general in Benghazi has killed scores of people and prompted several countries to urge their citizens to leave Libya.

The Tripoli fire broke out when a rocket struck a tank containing more than  six million litres (1.6 million gallons) of fuel before spreading to a second storage site.

On Monday, the government appealed to several countries for help, as Italy as well as Greece said their involvement would be contingent on a halt in the fighting.

On Tuesday, the government again called for a ceasefire in the battle for the airport that has left around 100 dead and 400 wounded since July 13th.