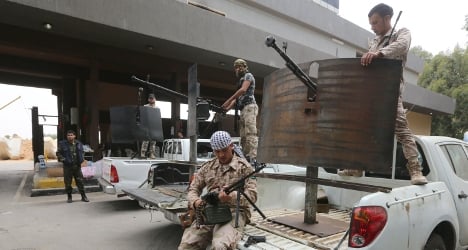 Members of the Libyan army guarding the western gate of Tripoli in May. Photo: Mahmud Turkia/AFP

"Staying in Libya signifies trying to have a role in several of the most important geopolitical questions of the coming years: peace, security and immigration," Renzi said.

Italy, which currently holds the rotating presidency of the European Union, has kept its embassy open in Libya, along with Britain.  But the European Union said it had moved its staff in Libya to Tunisia in light of the deteriorating security situation.

They would return to Tripoli "as soon as conditions allow," a spokesman for the EU's external affairs arm said.

Meanwhile, the Philippines was preparing on Thursday to evacuate 13,000 citizens from Libya as violence continued to rage and a Filipino worker was beheaded and a nurse gang-raped there.

At the same time, Greece was sending a warship to evacuate some of its nationals as well as some from other countries, while Spain is pulling out most of its embassy staff.

In Athens, meanwhile, an official said a navy frigate was en route to Libya to evacuate some 200 people, including diplomatic staff.

These include around 70 Greeks, some 15 Cypriots and 80 Chinese, in addition to other nationalities.

And the Spanish foreign ministry said it was pulling its ambassador and all but one of the embassy's staff due to the "worsening security situation".

The United States, Canada, France and Brazil have temporarily shuttered their embassies in Tripoli, while several Western countries and Egypt have advised their citizens to leave immediately.

Another round of clashes erupted on Thursday, airport security chief Al-Jilani al-Dahech said, with attackers assaulting the facility using both small arms and heavy weapons.

At least 100 people have reportedly been killed and 400 wounded since July 13th when the airport battle erupted.

Witnesses said there was also fighting on the road to the airport and in a western suburb of the capital on Thursday, while numerous explosions were heard in the city centre.

The Tripoli clashes, the most violent since Kadhafi's ouster, began with an assault on the airport by a coalition of groups, mainly Islamists, which has since been backed by fighters from third city Misrata.

The attackers are battling to flush out fellow former rebels from the hill town of Zintan, southwest of Tripoli, who have controlled the airport for the past three years.

Meanwhile, firefighters were still battling a blaze at a fuel depot near the airport that broke out on Sunday when a rocket hit a storage tank.

More than 90 million litres of fuel are stored in the facility, which also houses a natural gas reservoir.