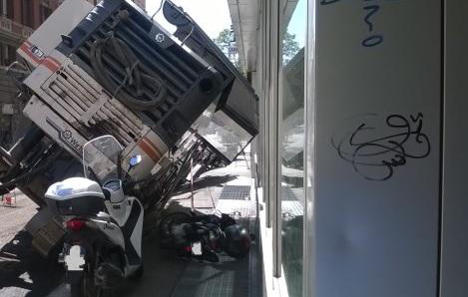 The accident happened at around 10am on Friday morning on via Palestro, by Rome’s busy Termini Station, Roma Today reported.

Several images of the vehicle and the hole, which was four metres wide by two metres deep, were posted on Twitter (see below).

Initial reports suggest that the road gave way while road works were being carried out. The cause of the accident, however, has yet to be determined.

Police and fire fighters were called to the scene, and at around 1:30pm firemen used a crane to pull the vehicle out of the hole.

The driver is uninjured but suffering from shock, Roma Today said.

Residents took to Twitter to express their shock at the incident. "Another sinkhole opens up in Termini. I ask [Mayor of Rome] Ignazio Marino is the area safe? I pass by there every day…" tweeted Lorenzo Rossi-Doria.

This isn’t the first time a road in the city has suddenly given way. Last week a car was swallowed up by a sinkhole in via Ruggero Di Lauria in the Vatican, creating chaos in the area. A burst water pipe was thought to be the cause of the accident.