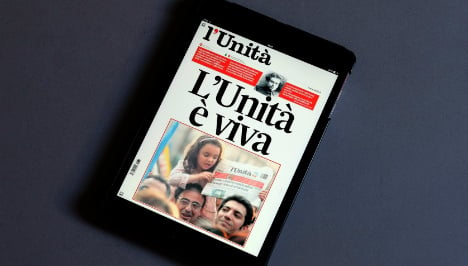 L'Unita, launched in 1924 by one of the founders of Italian Communism, Antonio Gramsci, suspended publication after shareholders failed to agree on a plan to save the debt-ridden daily.

"They killed L'Unita" read the newspaper's front page on Wednesday — an issue that consisted almost entirely of blank pages.

The newspaper's website carried a similar message: "After three months of fighting, they have succeeded: they have killed L'Unita."

The last official circulation figures from April show that L'Unita was distributing around 21,000 copies a day.

The failure of the publishing company to reach an agreement has left some 80 people — who had reportedly worked the last three months unpaid — without a job.

There was frustration among some staff that Prime Minister Matteo Renzi's Democratic Party, a principal shareholder in the newspaper, has not stepped in to save it.

"It is still surprising that the (Democratic Party) has not been able to find a solution," said Luca Lando, who was the newspaper's editor.

Politicians on both sides of the political spectrum lamented the newspaper's closure as a blow to media plurality in Italy.