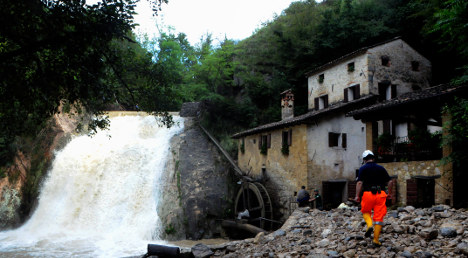 After a sudden 10-minute burst of heavy rain during the local festival in Refrontolo near Venice, the Lierza river burst its banks, local officials and media reported on Sunday.

Torrential rain also led to flooding in northern Bulgaria overnight on Saturday, leaving two people dead and prompting local authorities to evacuate more than 900 after a number of houses were left under water.

In Italy, the flooding hit near a popular beauty spot turning a local street into a raging river as the waters carried away tents, vehicles and stands.

The bodies of four men were discovered, some of them as far as one kilometre (over half a mile) from the area of the festivities, rescue officials said.

"When we arrived at the festival site, instead of a street we found a river which was more than a metre high," a firefighter told the Italian news agency ANSA.

Rescue workers were battling on Sunday to protect the 17th century Molinetto della Croda mill, a well-known local landmark, which sits beside the river.

Images from the town showed corrugated iron sheds torn from their foundations and cars that had been swept away resting on their sides, half-submerged in the water of the river.

Initial media reports said as many as 20 people had been hurt, but the president of the Veneto region, Luca Zaia, said Sunday that six remained in hospital, with one patient in intensive care.

President Giorgio Napolitano issued a statement to express his condolences to the families of the victims and "solidarity" with local residents.

Environment Minister Gian Luca Galletti said the tragedy was a reminder of the need to address the "structural fragility" of the land in some areas.

In November last year, flash floods in and around the Sardinian port of Olbia left 17 people dead and thousands homeless.

According to a report by the Institute of Atmospheric Sciences and Climate in Bologna, rainfall in July this year was 74 percent higher than the average for the month between 1971 and 2000.

The number of regions hit by flooding has doubled to eight in the last 10 years, according to Italy's main environmental organisation Legambiente which has called for more money to be spent on prevention.