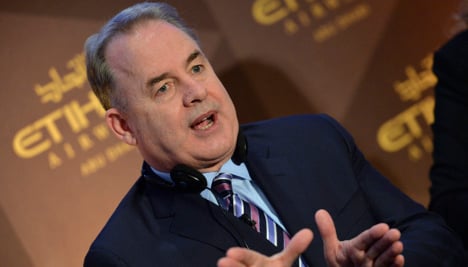 Etihad will invest €560 million in the hugely indebted airline as part of a deal that will be formally signed on Friday.

"Good work has been done," Lupi was quoted by Ansa as saying after meetings with Etihad chief executive James Hogan.

"It's an injection of confidence for the country, after yesterday's data," he added, referring Istat figures that showed Italy has slipped back into recession.

Hogan arrived in Rome on Tuesday to tie-up negotiations, which included Alitalia’s board agreeing to recommend that shareholders back a €300 million capital boost to tide the airline over until the deal is fully in place.

Italy’s state-owned Poste Italiane, a major shareholder, said last week it will invest €70 million in the airline in order to facilitate the merger.

The money will be put into a separate investment vehicle that will allow it to avoid taking on Alitalia’s debt, which is estimated at €800 million.

Labour issues have been a major hurdle in the negotiations after Etihad called for 2,171 jobs to be cut and the salaries of those who remained to be reduced, a move that Italy’s leaders have said is essential to save the airline.

Most unions agreed, with the exception of Italy's biggest union, the CGIL, and the far-left USB union.

Ground staff affiliated with CGIL went on strike at Rome’s Fiumicino airport this week in protest against the cuts, causing chaos for holidaymakers.