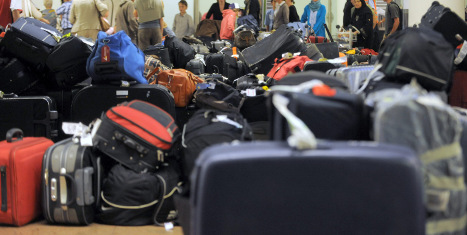 Italy’s Civil Aviation Authority was forced to draft in about 200 extra staff on Wednesday to deal with thousands of bags left stranded as Alitalia baggage crew protested over job cuts as part of the carrier’s merger with Etihad.

The four-day strike caused chaos at Rome’s busiest airport, leaving an estimated 14,000 suitcases stranded, including hundreds that could be seen piled high on carts near runways.

Some passengers were kept waiting for up to an hour to disembark their plane, while others boarded without their luggage.

The strike took place as Alitalia chief’s battled to save the hugely indebted airline during talks in Rome with Etihad’s CEO James Hogan.

"The strike – enforced while we are trying to save the company is a scandal. It's incomprehensible," Italy's Transport Minister Maurizio Lupi told journalists.

The Abu Dhabi carrier is expected to invest €560 million for 49 percent of the indebted Italian airline.

But redundancies have been a major hurdle, with Etihad asking for 2,171 jobs to be cut.

Most unions have agreed, with the exception of Italy's biggest union, the CGIL, and the far-left USB union.

"Unfortunately it is not the employer that gets affected but the passengers," consumer association Adusbef said.

An announcement on the Etihad deal is expected on Friday.