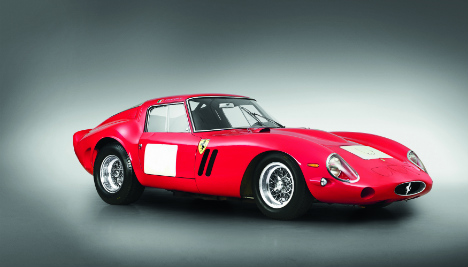 The previous record was held by a 1954 Mercedes-Benz W196R Formula 1 model bought in Britain last year for $30 million.

The Ferrari, which has a checkered past, auctioned at Monterey Car Week near San Francisco on Thursday and is from the Maranello Rosso collection. It has chassis number 3851 GT.

Only 39 such cars are known to have been manufactured, according to the Bonhams auction house.

Its first owner was French racer Jo Schlesser, who drove the car in competition with his friend, the Olympian alpine ski racer Henri Oreiller, during the 1962 Tour de France Automobile.

But the second time the French pair took the car out, during the Coupes du Salon race, Oreiller crashed it and was fatally killed.

"The car was badly damaged after hitting a trackside building and a mourning Jo Schlesser returned it to the factory for repair to as-new condition and subsequent re-sale," Bonhams said.

Paolo Colombo of Italy purchased it the following year for competition and later sold it to Ernesto Prinoth, who Bonhams said "embarked upon an energetic programme of mixed hill-climbing and circuit racing."

Italian enthusiast Fabrizio Violati acquired the car in 1965 and kept it until his death in 2010. It had since been retained by the Maranello Rosso Collezione.

The auctioneers did not name the new buyer.

Among the celebrities who own a Ferrari 250 GTO are the designer Ralph Lauren, Pink Floyd drummer Nick Mason and the heir to the Wal-Mart supermarket chain, Rob Walton, according to The Los Angeles Times.