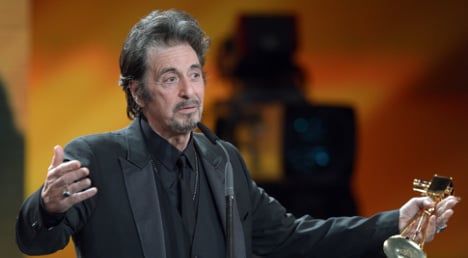 Al Pacino will be among the actors attending the Venice film festival. Maurizio Gamberini/AFP

Michael Keaton, of "Beetlejuice" and "Batman" fame, will likely be the first A-lister to zip by water taxi across the lagoon to present Mexican
director Alejandro Gonzalez Inarritu's "Birdman or the Unexpected Virtue of Ignorance".

In the first of 20 flicks vying for the coveted Golden Lion prize, Keaton stars as a washed-up actor, once famous for playing a superhero, who is now struggling to put on a Broadway play in a bid to regain his former glory.

French film composer Alexandre Desplat – whose dozens of works include the scores for "The King's Speech" and "Harry Potter and the Deathly Hallows" – will head up the main jury at the 71st edition of the world's oldest film festival, which runs until September 6th.

Many of the 55 films screening – 54 of which are world premiers – reflect "a moment in which the spectre of war is rising dramatically again", festival director Alberto Barbera said in Rome last month as he unveiled the line-up.

Among them is "Good Kill" by New Zealand director Andrew Niccol – who wrote "The Truman Show" – in which Hawke stars as a drone operator in Afghanistan, as well as David Oelhoffen's "Loin des hommes", in which "Lord of the Rings" star Viggo Mortensen plays a teacher in the Algerian war.

The five American films in competition include Al Pacino as an ex-con turned locksmith in David Gordon Green's "Manglehorn", and Ramin Bahrani's drama "99 Homes" about a father trying to recover his house after an eviction.

France will make a strong showing with four movies running for top prize, including Xavier Beauvois's "La Rancon de la gloire", based on a true story about two men who plot to steal Charlie Chaplain's coffin in Switzerland.

There is buzz from critics already over the only first feature competing for the Lion, the Turkish "Sivas", by Kann Mujdeci, about a young boy who befriends a stray dog he saves.

"The Act of Killing".

From Asia, Japan's Shinya Tuskamoto will unveil "Fires on the Plane", a jungle-based horror set at the end of World War II, while China's Xiaoshaui Wang is set to unnerve with a tale of stalking in "Red Amnesia".

Roy Andersson's Swedish comedy "A Pigeon Sat on a Branch Reflecting on Existence" about two world-weary men on a sales trip may provide light relief, but German-Turkish director Fatih Akin's "The Cut" takes us back to the theme of genocide, following an Armenian survivor as he searches for his daughters.

Other hotly-awaited flicks include Barry Levinson's "The Humbling", which stars Pacino as a suicidal actor who has an affair with a much younger lesbian, as well as "The Sound and the Fury" by American heartthrob James Franco, who will be in Venice to pick up an innovation in cinema award.