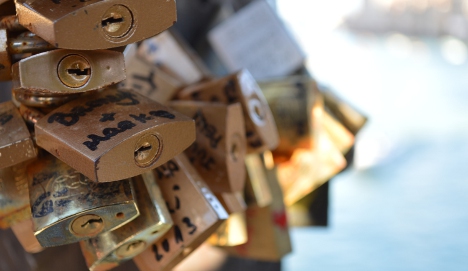 Couples have for centuries been drawn to the romance of Venice, more recently deciding to mark their visit by leaving a love lock on one of the city’s famous bridges.

But now Venetians have had enough. The fragile bridges have been worn out by the locks, while locals are fed up with people illegally peddling them on the city's streets.

This week Alberto Toso Fei launched a campaign, Unlock Your Love, to plead with tourists to give up the supposedly romantic gesture.

Venetians have enthusiastically got behind the campaign, covering the city with multilingual leaflets telling tourists to correct what is seen as their unruly behaviour.

"Putting locks on Venetian bridges in an act of vandalism. Your love doesn't need chains. Venice doesn't need your garbage,” the flyers read.

The information campaign is necessary to make tourists realize they are damaging the city, building on the work of other Venetian groups, Toso Fei told The Local.

“A lot of groups are started online, such as Masegni & Nizioleti and Fallo, which have for a long time worked to stop the love locks. Usually they work during the night, removing the locks.

“But it’s now necessary to inform people,” he said. The majority of tourists flocking to Venice each year behave perfectly well, but Toso Fei said it’s time to tackle the minority of love lock fans.

“It’s a serious problem for the structure of the bridges, the city’s budget and beauty,” he said.

Monica Cesarato, a teacher in the area, went further and said the love locks are “disgusting”.

“I love Venice but they are absolutely disgusting; it has nothing to do with our culture. They are horrible to look at and dangerous,” she told The Local. The craze has also encouraged illegal vendors to peddle the locks, Cesarato added.

“People should be intelligent enough not to do it…In the old days they used to throw coins into the fountains, but now with the economic crisis they don’t throw their money away like this,” she remarked.

But with no sign of Venice’s appeal dwindling for love-struck visitors, the romantics may wonder what else they can do to prove their affection. A gondola ride, a bunch of roses and a chilled bottle of prosecco – from the city’s Veneto region – are all good options.

But Cesarato has an alternative piece of advice: “The biggest gift they can give themselves is to respect our city and to go home knowing they have done that.”