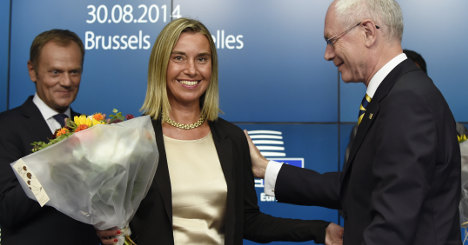 Mogherini is congratulated by outgoing European Council President Herman van Rompuy, while his successor Donald Tusk looks on. Photo: John Thys/AFP
The appointment of Mogherini as High Representative was confirmed at a summit of European heads of government in Brussels on Saturday. The summit also appointed Polish Prime Minister Donald Tusk as president of the council, to succeed Belgian Herman van Rompuy.

Speaking at a press conference in Brussels after the announcement was made, she said: “I know how challenging and difficult it will be.”
PROFILE: INTRODUCING FEDERICA MOGHERINI
Hours before the summit, left-of-centre EU leaders meeting in Paris formally backed her for the job.
"I have high hopes that she will be chosen tonight," said French President Francois Hollande, eager to see a socialist and southern European in a top role.
Renzi has campaigned hard for Mogherini, saying there was "only one candidate" for the job, in the face of stiff opposition from critics who viewed her as lightweight and too soft on Russia. The opposition to her candidacy led to a postponement of the decision after an EU summit in July failed to reach agreement.
Eastern European countries, concerned by Russian aggression in Ukraine, led the opposition. But Italy has since hardened its line against Moscow and Mogherini garnered significant backing from leaders of the EU's socialist bloc, including French President François Hollande.
Mogherini, who will take office on November 1st, was little known before becoming Italy’s foreign minister in February this year. At 41, she is just two years older than Prime Minister Matteo Renzi in a country that has traditionally favoured older politicians.
But it was not only her inexperience that led to criticism of her nomination as EU High Representative – her seemingly soft line on Russia was perhaps more problematic for many. Her first overseas visit as Italian foreign minister was to Moscow, where she endorsed the controversial South Stream gas pipeline project. She was also pictured shaking hands with Russian President Vladimir Putin, who called on her to help repair relations between Russia and the EU.
However, Mogherini has worked hard since the July summit to show a tougher attitude towards Russia. Following the downing of Malaysian Airlines flight MH17, she called for a “coordinated, united and strong” response to the Ukraine crisis.
And at the press conference in Brussels following her appointment, she defended her trip to Russia, claiming it was intended to facilitate dialogue.
“We will have time to discuss whether these ways have found any success, but in these hours it seems it has not.”
While critics have focused on Mogherini's faults, her languages should stand her in good stead  – she is fluent in English, French and also speaks some Spanish. This is in stark contrast to Donald Tusk, whose inability to speak English has led some to question his suitability for the job as president of the council.
Mogherini's supporters also point out that Lady Ashton was even more inexperienced than her at the time of her appointment, yet is widely viewed as having exceeded expectations. However, spiralling tensions with Russia, a worsening situation in Iraq and Syria as ISIS advances and continuing tensions between Israel and the Palestinians in Gaza, the role of High Representative is set to become even more demanding.
With a degree in political science from Rome's Sapienza University, Mogherini also studied as an Erasmus student at the Institute of Islamic Studies and Research in Aix en Provence, France, where she wrote a thesis about Islamic politics.
She was elected to parliament in 2008 and also represented Italy at the Nato Parliamentary Assembly.
Meanwhile Tusk, is the first eastern European to hold such a senior role in the EU and is known as a critic of the Kremlin.
"I come to Brussels from a country that deeply believes in the significance of Europe," Tusk said at a news conference with Van Rompuy, at which the outgoing leader presented him with a bunch of flowers.
Strongly backed by Germany's Angela Merkel, Tusk is a pro-European free marketeer with roots in Poland's Solidarity anti-Soviet trade union who has been prime minister since 2007.
He will also head up summits of the countries that use the euro, despite Poland not being a member of the single currency. Tusk will take office on December 1st.

“@eu_eeas: Catherine Ashton “I would like to congratulate Federica #Mogherini on her nomination" #EUCO @FedericaMog pic.twitter.com/4mQOOgl76i”