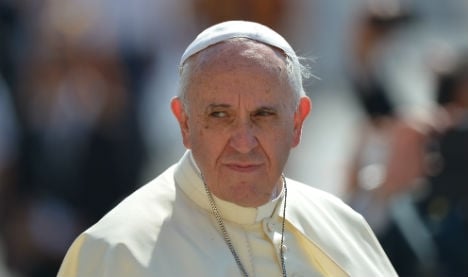 Addressing 20,000 people at his weekly audience in St Peter's square on Wednesday, the Argentinian head of the Roman Catholic Church said he was profoundly concerned for the families of ThyssenKrupp employees at its AST unit in the Terni region of central Italy.

"Those who, for reasons of money, eliminate jobs have to know that they are removing the workers' dignity," the Pope, formerly Jorge Bergoglio, told the crowd in remarks that may enhance the negative reputation he has among some right-wing commentators in the United States.

ThyssenKrupp is proposing to cut 550 jobs, around one fifth of the workforce, as part of a plan to reduce operating costs at the loss-making AST plant by €100 million per year. The company says the plant will face a much bigger restructuring if costs are not brought into line with revenues against a backdrop of weak demand and economic gloom across the eurozone.

Francis was first accused of being sympathetic to the tenets of Karl Marx's revolutionary world view in 2013, following the publication of the first apostolic exhortation of his papacy. In it he denounces growing economic inequality and warns that the "idolatory of money" will lead to a new tyranny.

He also challenges the validity of the "trickle down" theory, which holds that free market capitalism will ultimately deliver greater prosperity for the poor than any other system.

He subsequently denied any sympathy for communist ideas, saying the ideology was fundamentally wrong and joking that Marxists had stolen all their best lines from the Bible.

He has also said many of the Marxists he has known over the years have been good people. His papacy has been marked by moves to rehabilitate some supporters of Liberation Theology, a radical brand of catholicism that was influential in Latin America in the 1970s and 1980s.

Supporters often aligned themselves with revolutionary and dissident movements in opposition to the region's dictatorships. They came to be regarded with suspicion by the church hierarchy however and a number of prominent exponents were suspended or excommunicated from the church.

Biographers say the current pope's attitudes to social questions were forged partly by the experience of his Italian family, which suffered financial ruin in the depression that followed the 1929 Wall Street crash.