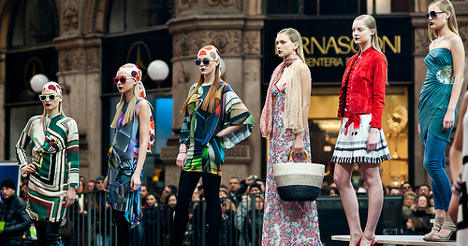 As the global fashion circus swings into Milan on Wednesday, the answers to these and some other pressing issues should be a little clearer by the weekend.

Global hemlines up or down? The trend is supposed to be a predictor of which way stocks are headed and there was a time when the only place to get a definitive answer to that question was Milan.

But, like its soccer teams, AC and Inter, Italy's economic epicentre is no longer quite the market-moving force it once was, when it comes to if-you-have-to-ask-the-price-you-can't-afford-it clothing.

The world of high fashion has moved on, globalised and diversified and the competition has never been more ferocious.

New York is punching harder than ever on the back of a Stateside economic recovery that so far has eluded Italy and the rest of the eurozone.

London has ditched quirky-bizarre in favour of quirky-commercial and Paris is, well, Paris.

So there is a feeling among insiders that Milan has something to prove this week as the cream of Italian creativity presents its vision of what well-heeled women the world over should be wearing through the spring and summer of 2015.

Sign of the times, perhaps: this week's show will not, as had become traditional, be brought to a close by Armani.

Instead the 80-year-old master of sartorial understatement has opted to show his eponymous collection on Saturday, apparently because of concern that the most influential tailors of opinion in the world of fashion will all be heading home before the week officially wraps up on Monday.

According to fashion media reports, Armani's decision to pull out of the final day prompted some other leading houses to stamp their stilettos and insist on following suit, a state of affairs which has given the week a lop-sided look with the sixth and final day dedicated to new talent and devoid of a marquee name.

And the feeling that all is not absolutely fabulous in the upper echelons of the Italian style industry has been enhanced by the ongoing spat that means Dolce & Gabbana, one of the country's best known brands internationally will, once again, not be part of the official programme of shows.

Lionel Messi's favourite designers will nevertheless be showcasing their 2015 Spring/Summer collection on Sunday.

Gucci are the biggest hitters on the opening day (Prada's stuff will be strutted on Thursday) but there will also be keen interest in the collection being presented by Angelos Bratis, whose increasingly confident touch with elegant womenswear has seen him tipped as a potential successor should Armani himself decide to hand over the creative reins at his huge global empire.

Bratis, who was born in Greece but studied in the Netherlands, is the latest in a series of young designers who have benefited from Armani's sponsorship and he will be showing in the veteran's own Armani Teatro, following in the footsteps of other promising emerging talents including Stella Jean and Julian Zigerli.

Later in the week there will be particularly keen interest in the collection presented by Elisabetta Franchi, a well-established and commercially successful designer from Bologna who is putting on a Milan show for the first time in the hope of bolstering the growing international reputation of her very feminine clothing targeted at the urban workwear market.