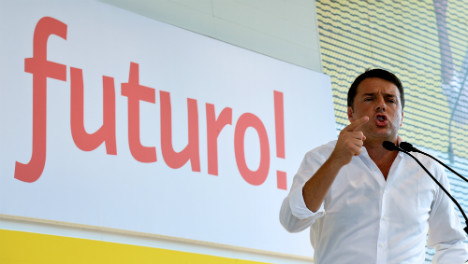 The spunky 39-year-old is under increasing pressure to follow his pledges with concrete action or risk losing face with Brussels and Berlin just as he tries to win greater margins for budget flexibility from the bloc for his debt-swamped country.

With youth unemployment at a towering 42 percent, Renzi is rushing to launch his so-called "Jobs Act" which aims to boost the labour market by getting rid of "precarious" temporary contracts and increasing incentives for employers to hire new workers.

Critics, however, accuse Renzi of attempting to do away with Article 18, a law cherished by trade unions because it protects those on long-term contracts, obliging businesses to pay large fines or re-hire workers if dismissals are ruled to have been unfair.

The premier — nicknamed "the scrapper" for taking on the old guard — would rather have a system where workers' rights and benefits increase over time.

On Friday, the simmering squabble boiled over with Susanna Camusso, head of Italy's largest trade union CGIL, accusing Renzi of being a "Thatcherite".

The CGIL and other large unions threatened to strike over "five years of forced cuts and pay freezes" and called for demonstrations in the streets of Rome.

A furious Renzi, head of the centre-left Democratic Party (PD) and a Tony Blair fan, wasted no time in responding in a video posted on You Tube.

"We are not concerned with Margaret Thatcher, we're concerned with Marta, who is 28 years old, and doesn't have the right to paid maternity leave," he said, slamming a "divide between first and second league citizens" for which he said the unions were partly responsible.

His job is not being made easier by rebels in his own ranks, led by former party secretary Pier Luigi Bersani, who has sworn to defend Article 18.

The premier looks increasingly forced to rely on the support of Silvio Berlusconi, who was given up for politically dead last year but celebrated a symbolic victory this weekend after the European Court of Human Rights agreed to hear an appeal against his tax fraud conviction.

Renzi's plan is to get the Senate to approve the bones of the "Jobs Act" before a special EU jobs summit in Milan on October 8, and he's threatened to use emergency measures if he meets resistance. He cannot afford not to have something concrete in hand.

This week the International Monetary Fund cut Italy's growth forecast — now expected to contract 0.1 percent in 2014, shrinking for the third year in a row — and urged speedy and "firm implementation" of the reforms to kick-start the economy.

Despite the difficulties he faces, Renzi, who came to power in February after ousting his predecessor, still boasts strong approval ratings in the polls.

And experts say he may very well win this battle with the support of ordinary Italians, because the unions are seen as defending an outdated privilege from a golden era which does not apply to the majority of people today.

Fewer than half those employed have a permanent contract — compared to over 60 percent in France and Germany and over 70 in Britain — and Article 18 only applies to firms with 15 employees or more, not Italy's myriad of small, family-run enterprises.

"This is not a new battle in Italy, but the landscape is different this time, and Renzi knows it, so he's overriding the unions to speak directly to the citizens," Maurizio Del Conte, professor of labour rights at the Bocconi University in Milan, told AFP.

"This is a key issue and the unions will have to change tack and review the system in all its complexity, or risk appearing out of touch," he said.

The spat has worried some government watchers, with Piero Ignazi in an editorial in the Repubblica daily warning that "gladiatorial exhibitions on both sides make everything more difficult."

But Italy's financial daily Il Sole 24 Ore said Renzi "has finally stopped dilly-dallying and declared war on the unions… speaking directly to the most
vulnerable workers".

"As many are now realising, Renzi is right," it said.