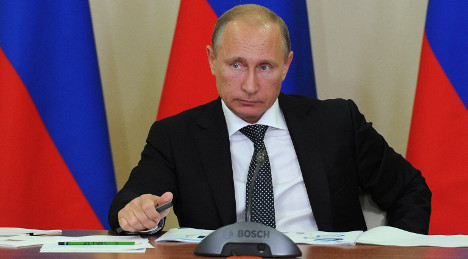 "He has confirmed he is coming," an Italian government official told AFP on Wednesday.

The decision came amid ongoing tensions between Russia and the EU over the conflict in Ukraine and has reportedly caused alarm among EU institutions, La Repubblica reported.

A message was reportedly sent to EU governments from Brussels on Tuesday saying: "Tell us how to manage the presence of Putin in Milan."

The summit, which is held every two years, is due to take place on October 16th and 17th.

The Russian president was among the 55 leaders invited to the event in the spring, in line with protocol.

As the situation in Ukraine worsened, Italy's Foreign Minister Federica Mogherina reportedly reiterated the invitation during a meeting with Putin in Moscow in July.

The meeting infuriated leaders of some eastern European countries, including Poland, who attempted to block Mogherini's rise to the coveted role of EU foreign policy chief in late August.

The EU-Asia summit is expected to focus on sustainable growth and security, although Putin's attendance and the Ukraine crisis are likely to dominate proceedings.

Italy expects the summit to be attended by German Chancellor Angela Merkel, who normally takes a lead in western contacts with Putin, British Prime Minister David Cameron and Chinese Prime Minister Li Keqiang, among others.

Malaysia will be among the countries represented at the summit. The government there is still investigating the July downing of Malaysia Airlines flight MH17 from skies above Ukraine in which 298 people died.

This summer has seen claims of incursions into Ukraine by regular Russian troops and a sharp spike in the numbers of people dying in the conflict.

According to the UN Human Rights Council, the death toll ran at 11 people per day from mid-April to mid-July, spiked to 36 a day in the month after that and reached a peak of 42 a day before a September 5 ceasefire.

More than 3,500 people have now died since the crisis erupted early this year following the election of a pro-European government in Ukraine and Russia's subsequent annexation of Crimea.

Meanwhile, €30 million worth of assets belonging to Arkady Rotenberg, a judo partner and long-term ally of Putin, were seized in Italy on Tuesday.